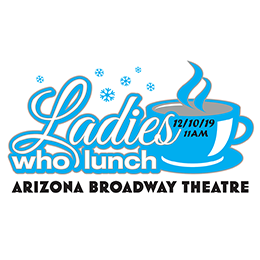 × Ladies Who Lunch with Over 40 Specialty Vendors will be in our lobby and our new spacious Encore Room starting at 9:00 am for all of your holiday shopping Door Prizes and more....

It’s that time of year again! Get the gals together and join us at ABT on Tuesday, December 10 for our annual Ladies Who Lunch. Come shop ’til you drop and enjoy a fabulous lunch and LIVE entertainment with the amazing pianist Nicole Pesce (See bio below)

Over 40+ Specialty vendors will be in the lobby starting at 9:00 am and after the event for shopping. For special dietary needs, your server will be able to help you when you arrive

Arizona Foothills Magazine honored Nicole with the “Best of 2014 Award” for Best Local Band/Musician. With a repertoire consisting of over 12,000 memorized songs; Nicole is often dubbed “the human iPod” and is recognized as one of the “top ten musicians to hear in Phoenix” by the Arizona Republic.

At the age of 7, Nicole began playing piano and quickly committed over 100 songs to memory. By age 10, over 500 songs were memorized and she won First place in the Discovery National Television Competition. At age 11, Nicole began composing music; by 14, she appeared on the Jerry Lewis MDA Telethon which aired to over sixty million viewers followed by an extensive US tour. During a year long residency in Las Vegas, Nicole had the pleasure of performing on stage with Debbie Reynolds at Debbie’s hotel and Casino. Numerous performances followed for Rich Little, Buddy Greco, Pat Boone, Lew King and Barbara Stanwyck.

As a composer with a catalog of over 300 songs, Nicole was commissioned to write the title track to the compilation CD “Amada” – dedicated to the Susan G. Koman Breast Cancer Foundation. Following the CD release, Nicole’s original music was featured in a documentary film for the Koman foundation presented at the Pink Tie Gala in Tampa, Florida.

For over a decade, Nicole was the resident pianist at the Ritz Carlton Hotel in Phoenix where she regularly entertained audiences with vocalist Jeffrey Hattrick - playing everything from Bach to Lady Gaga, with styles including Classical, Jazz, Ragtime, Blues, Boogie Woogie, Broadway, Latin, Oldies, Pop, Opera, Spiritual, Country, Rock, Funk and Hip Hop.

“One of the top 10 musicians in the valley.” – The AZ Republic

“A one-woman piano phenomenon.” – Kenneth LaFave – LeFave On The Arts