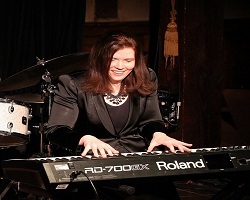 Sunday, October 20, 2019- NICOLE PESCE Pianist, keyboardist, composer and arranger Nicole Pesce entertains audiences with her unique blend of virtuosity, humor and pizzazz. Nicole’s YouTube “Happy Birthday Variations” video currently has over three million views. Arizona Foothills Magazine honored Nicole with the “Best of 2014 Award” for Best Local Band/Musician. With a repertoire consisting of over 12,000 memorized songs; Nicole is often dubbed “the human iPod” and is recognized as one of the “top ten musicians to hear in Phoenix” by the Arizona Republic.

At the age of 7, Nicole began playing piano and quickly committed over 100 songs to memory. By age 10, over 500 songs were memorized and she won First place in the Discovery National Television Competition. At age 11, Nicole began composing music; by 14, she appeared on the Jerry Lewis MDA Telethon which aired to over sixty million viewers followed by an extensive US tour. During a year long residency in Las Vegas, Nicole had the pleasure of performing on stage with Debbie Reynolds at Debbie’s hotel and Casino. Numerous performances followed for Rich Little, Buddy Greco, Pat Boone, Lew King, and Barbara Stanwyck. As a composer with a catalog of over 300 songs, Nicole was commissioned to write the title track to the compilation CD “Amada” – dedicated to the Susan G. Koman Breast Cancer Foundation. Following the CD release, Nicole’s original music was featured in a documentary film for the Koman Foundation presented at the Pink Tie Gala in Tampa, Florida.

For over a decade, Nicole was the resident pianist at the Ritz Carlton Hotel in Phoenix where she regularly entertained audiences with vocalist Jeffrey Hattrick – playing everything from Bach to Lady Gaga, with styles including Classical, Jazz, Ragtime, Blues, Boogie Woogie, Broadway, Latin, Oldies, Pop, Opera, Spiritual, Country, Rock, Funk and Hip Hop.

Sunday Brunch at the Encore is a series of events running from October 2019 through May of 2020. The City of Peoria has graciously sponsored the event with the intent of bringing artistic events to Peoria residents. This event features 3 x 20-minute entertainment segments over a 2-hour time period concluding at 1pm. The entertainment varies each month and aims to showcase local talent. The price of the brunch is $29 and will feature various food stations including omelets, breads, salad, entrees and dessert. Bar service featuring Mimosas and Bloody Mary’s will be available throughout the event. Reservations are taken through the Box Office and seating will be assigned according to the size of the party with billing on the day of the event. Attendees are encouraged to stay for the 2 hours of entertainment and may continue dining throughout the performances.