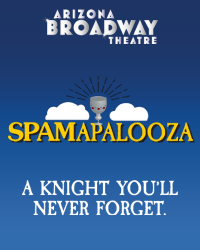 You’re not dead yet! Celebrate and support Arizona Broadway Theatre at this one-of-a-kind event!

Lords and Ladies, and the residents of The Valley of The Sun! I, King Arthur, and my merry men have taken over Arizona Broadway Theatre’s Broadway Ball to bring you Spam-a-palooza: A Knight You’ll Never Forget! The event will celebrate and kickoff the 22 | 23 Season plus benefit ABT Performing Arts Association’s mission.

Dance to the Sweetwater Strings enchanting sounds or head to the Encore Room for the beats of the Knights of the Round Table. Drink from a goblet with an Elderberries cocktail or a brew of your choice. Take selfies with the Spamalot cast members. Laugh with other guests at all that is Monty Python. Find your way to the Mainstage Theatre for a shrubbery salad, dinner and a special performance of “Find Your Grail” with the cast of ABT’s production of Monty Python’s Spamalot. The evening will also include honoring Tom Eggleston, former Glendale Vice-Mayor, and longtime ABT board member. Guests will proceed to the Grand Lobby for dessert. An online auction, and other fundraising games are being planned for the event including a costume contest (more details to come) – all to benefit the non-profit organization, established in 2006. ABT’s teen troupe, HyRev will also perform by the request of King Arthur.