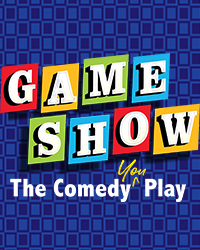 Be a part of the "TV studio audience" in this hilarious show, set during a "live broadcast" – where anything can and does happen!


Set during a “live broadcast” of a fictional, long-running TV game show, Game Show places the theater audience in the role of the TV studio audience, in which members are picked as the contestants to play the trivia-based game and win actual prizes. In addition to watching and playing during the “broadcast” – where anything can and does happen – the audience also witnesses all the backstage, back-stabbing antics “behind the scenes” that go on during the “commercial breaks” of Game Show.