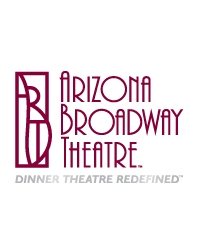 The Great American Songbook and All That Jazz" featuring AZ Swing Kings Orchestra with vocalists Vito Maynes, Bridget Maynes, and "The Aug" - pianist/arranger

This performance will be on the Arizona Broadway Theatre Main stage. The tables for the audience members will be spaced apart for social distancing. Tickets are $32 for the concert, or $52 which includes the concert and a 3-course dinner.

The Great American Songbook is a term used to describe the music from the era of the most important and most influential American popular songs of the 20th century – principally from Broadway, musical theater, and Hollywood musical film. These enduring songs are from the 1930s through the 1960s, and include hundreds of songs of enduring popularity.

The AZ Swing Kings is a 19-piece big band consisting of professional all-star musicians who play the authentic sounds of the famous bands who represented the swing and jazz eras. The band is directed by Lenny King, founder and former leader of the Chicago Metropolitan Jazz Orchestra.

Vito Maynes is one of ten musically talented siblings. He performs in the timeless style of Frank Sinatra and has been involved in music most of his life. The Big Band Era was the genre that has fascinated him the most.

The "Bridget & "The Aug" Duo has been in existence since 1990. The duo consists of the lovely vocals of Bridget Maynes, and the piano/keyboard styling of Auggie Mendoza. Bridget is the founder of the award-winning "Mayneswing" girls trio which won Best Vocal Group of the year for 3 years in a row by "Jazz In Arizona." Auggie "The Aug" is a very famous name in the valley's music industry as a bassist, pianist, and music writer/arranger.

Vegetarian option – must be ordered prior to arrival: Vegetable Lasagna – layers of pasta and fresh seasonal vegetables topped with mozzarella cheese and marinara sauce. Served with roasted red potatoes.

Soft beverages and alcohol are not included in the price.

If purchasing a dinner, dining starts at 5:30pm. Dining guest will not be able to order dinner if arriving later than 6:00pm. Show Only guest will be able to enter theatre at 6:45pm, at that time, all guest in theatre must be wearing a mask.