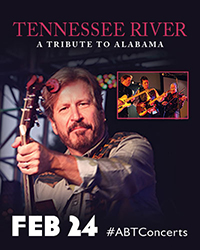 × About Tennessee River ~ A Tribute To Alabama

Already established as a strong cross-over vocal ensemble project, the members of TENNESSEE RIVER wanted to showcase their own vocal prowess by paying homage to the band they felt transformed country music with their stellar vocal blend. Prior to forming as TENNESSEE RIVER, these seven gifted concert musicians had performed internationally in various country and rock projects, and have frequently been compared to such legendary bands as the Eagles, Lynyrd Skynyrd, Diamond Rio, and of course ALABAMA.

TENNESSEE RIVER is the first and ONLY tribute band that has the vocal chops to do Alabama’s music justice, with their new hybrid of contemporary cross-over music, bringing a fusion of the rural and urban sounds of modern-day country and blues, with the spirit of rock ‘n’ roll, TENNESSEE RIVER stays true to the essence of Alabama’s music, taking their chart-topping songs and adding their own fresh, modern and unique energy, bringing Alabama’s music alive again for a whole new generation of country music fans.